Facebook’s Timeline profiles may be getting a redesign, but this one probably won’t trigger a backlash.

New Facebook Timeline being testedThe new Timeline design, spotted by TPM Livewire, condenses the biographical information at the top of the page, so it’s nested within the user’s banner image instead of appearing below.

Links to the user’s friends list, photos, locations, and Likes are tucked neatly underneath the banner, next the user’s profile picture. Alongside those links, a new button called “Summary” leads to a list of major life events.

“We can confirm this is a small test, but don’t have anything further to share at this time,” a Facebook representative told PCWorld in a statement. 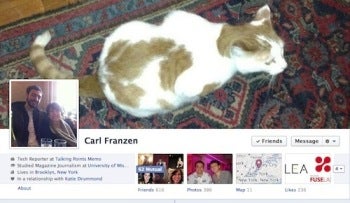 What the current Facebook Timeline looks like.Facebook introduced Timelines last September as a replacement for the site’s existing profile pages. Unlike the old profiles, users can add events to any point in their Timelines, even pre-Facebook, so that the page tells an entire life story. Facebook began rolling out Timeline to all users in January.

The existing design does seem a bit sloppy and in need of streamlining, so the changes that Facebook is testing probably wouldn’t cause users to revolt–as is often the reaction to new designs.

Sign up for our newsletter to grow your business with marketing, small business & WordPress tips, advice, news…& special offers!